During local authentication, an app authenticates the user against credentials stored locally on the device. In other words, the user "unlocks" the app or some inner layer of functionality by providing a valid PIN, password or biometric characteristics such as face or fingerprint, which is verified by referencing local data. Generally, this is done so that users can more conveniently resume an existing session with a remote service or as a means of step-up authentication to protect some critical function.

In Android, there are two mechanisms supported by the Android Runtime for local authentication: the Confirm Credential flow and the Biometric Authentication flow.

The confirm credential flow is available since Android 6.0 and is used to ensure that users do not have to enter app-specific passwords together with the lock screen protection. Instead: if a user has logged in to the device recently, then confirm-credentials can be used to unlock cryptographic materials from the AndroidKeystore. That is, if the user unlocked the device within the set time limits (setUserAuthenticationValidityDurationSeconds), otherwise the device needs to be unlocked again.

Note that the security of Confirm Credentials is only as strong as the protection set at the lock screen. This often means that simple predictive lock-screen patterns are used and therefore we do not recommend any apps which require L2 of security controls to use Confirm Credentials.

Reassure that the lock screen is set:

Make sure that the unlocked key is used during the application flow. For example, the key may be used to decrypt local storage or a message received from a remote endpoint. If the application simply checks whether the user has unlocked the key or not, the application may be vulnerable to a local authentication bypass.

Validate the duration of time (seconds) for which the key is authorized to be used after the user is successfully authenticated. This is only needed if setUserAuthenticationRequired is used.

Biometric authentication is a convenient mechanism for authentication, but also introduces an additional attack surface when using it. The Android developer documentation gives an interesting overview and indicators for measuring biometric unlock security. 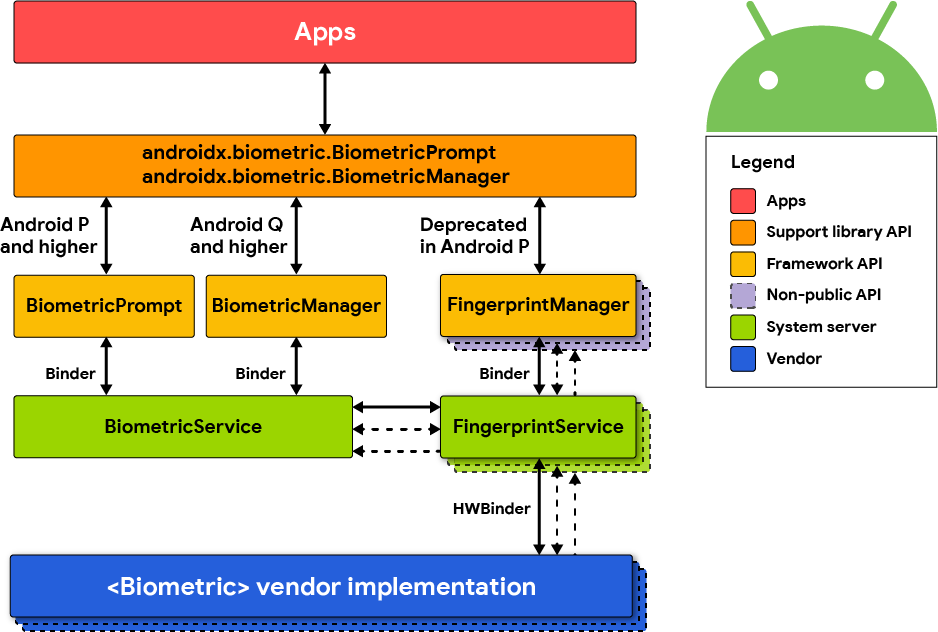 The BiometricPrompt class is a significant improvement, as it allows to have a consistent UI for biometric authentication on Android and also supports more sensors than just fingerprint.

This is different to the FingerprintManager class which only supports fingerprint sensors and provides no UI, forcing developers to build their own fingerprint UI.

A very detailed overview and explanation of the Biometric API on Android was published on the Android Developer Blog.

You can achieve better security by using the fingerprint API in conjunction with the Android KeyGenerator class. With this approach, a symmetric key is stored in the Android KeyStore and unlocked with the user's fingerprint. For example, to enable user access to a remote service, an AES key is created which encrypts the authentication token. By calling setUserAuthenticationRequired(true) when creating the key, it is ensured that the user must re-authenticate to retrieve it. The encrypted authentication token can then be saved directly on the device (e.g. via Shared Preferences). This design is a relatively safe way to ensure the user actually entered an authorized fingerprint.

An even more secure option is using asymmetric cryptography. Here, the mobile app creates an asymmetric key pair in the KeyStore and enrolls the public key on the server backend. Later transactions are then signed with the private key and verified by the server using the public key.

Note that there are quite some vendor/third party SDKs, which provide biometric support, but which have their own insecurities. Be very cautious when using third party SDKs to handle sensitive authentication logic.

Android provides a library called Biometric which offers a compatibility version of the BiometricPrompt and BiometricManager APIs, as implemented in Android 10, with full feature support back to Android 6.0 (API 23).

You can find a reference implementation and instructions on how to show a biometric authentication dialog in the Android developer documentation.

There are two authenticate methods available in the BiometricPrompt class. One of them expects a CryptoObject, which adds an additional layer of security for the biometric authentication.

The authentication flow would be as follows when using CryptoObject:

If CryptoObject is not used as part of the authenticate method, it can be bypassed by using Frida. See the "Dynamic Instrumentation" section for more details.

Developers can use several validation classes offered by Android to test the implementation of biometric authentication in their app.

This section describes how to implement biometric authentication by using the FingerprintManager class. Please keep in mind that this class is deprecated and the Biometric library should be used instead as a best practice. This section is just for reference, in case you come across such an implementation and need to analyze it.

Begin by searching for FingerprintManager.authenticate calls. The first parameter passed to this method should be a CryptoObject instance which is a wrapper class for crypto objects supported by FingerprintManager. Should the parameter be set to null, this means the fingerprint authorization is purely event-bound, likely creating a security issue.

The creation of the key used to initialize the cipher wrapper can be traced back to the CryptoObject. Verify the key was both created using the KeyGenerator class in addition to setUserAuthenticationRequired(true) being called during creation of the KeyGenParameterSpec object (see code samples below).

Safely implementing fingerprint authentication requires following a few simple principles, starting by first checking if that type of authentication is even available. On the most basic front, the device must run Android 6.0 or higher (API 23+). Four other prerequisites must also be verified:

If any of the above checks fail, the option for fingerprint authentication should not be offered.

It is important to remember that not every Android device offers hardware-backed key storage. The KeyInfo class can be used to find out whether the key resides inside secure hardware such as a Trusted Execution Environment (TEE) or Secure Element (SE).

On certain systems, it is possible to enforce the policy for biometric authentication through hardware as well. This is checked by:

The following describes how to do fingerprint authentication using a symmetric key pair.

Fingerprint authentication may be implemented by creating a new AES key using the KeyGenerator class by adding setUserAuthenticationRequired(true) in KeyGenParameterSpec.Builder.

To perform encryption or decryption with the protected key, create a Cipher object and initialize it with the key alias.

The following describes how to do fingerprint authentication using an asymmetric key pair.

To implement fingerprint authentication using asymmetric cryptography, first create a signing key using the KeyPairGenerator class, and enroll the public key with the server. You can then authenticate pieces of data by signing them on the client and verifying the signature on the server. A detailed example for authenticating to remote servers using the fingerprint API can be found in the Android Developers Blog.

A key pair is generated as follows:

To use the key for signing, you need to instantiate a CryptoObject and authenticate it through FingerprintManager.

You can now sign the contents of a byte array inputBytes as follows.

Android 7.0 (API level 24) adds the setInvalidatedByBiometricEnrollment(boolean invalidateKey) method to KeyGenParameterSpec.Builder. When invalidateKey value is set to true (the default), keys that are valid for fingerprint authentication are irreversibly invalidated when a new fingerprint is enrolled. This prevents an attacker from retrieving they key even if they are able to enroll an additional fingerprint.