The OWASP Mobile Application Security Verification Standard (MASVS) defines a mobile app security model and lists generic security requirements for mobile apps. It can be used by architects, developers, testers, security professionals, and consumers to define and understand the qualities of a secure mobile app. The OWASP Mobile Application Security Testing Guide (MASTG) maps to the same basic set of security requirements offered by the MASVS and depending on the context they can be used individually or combined to achieve different objectives. 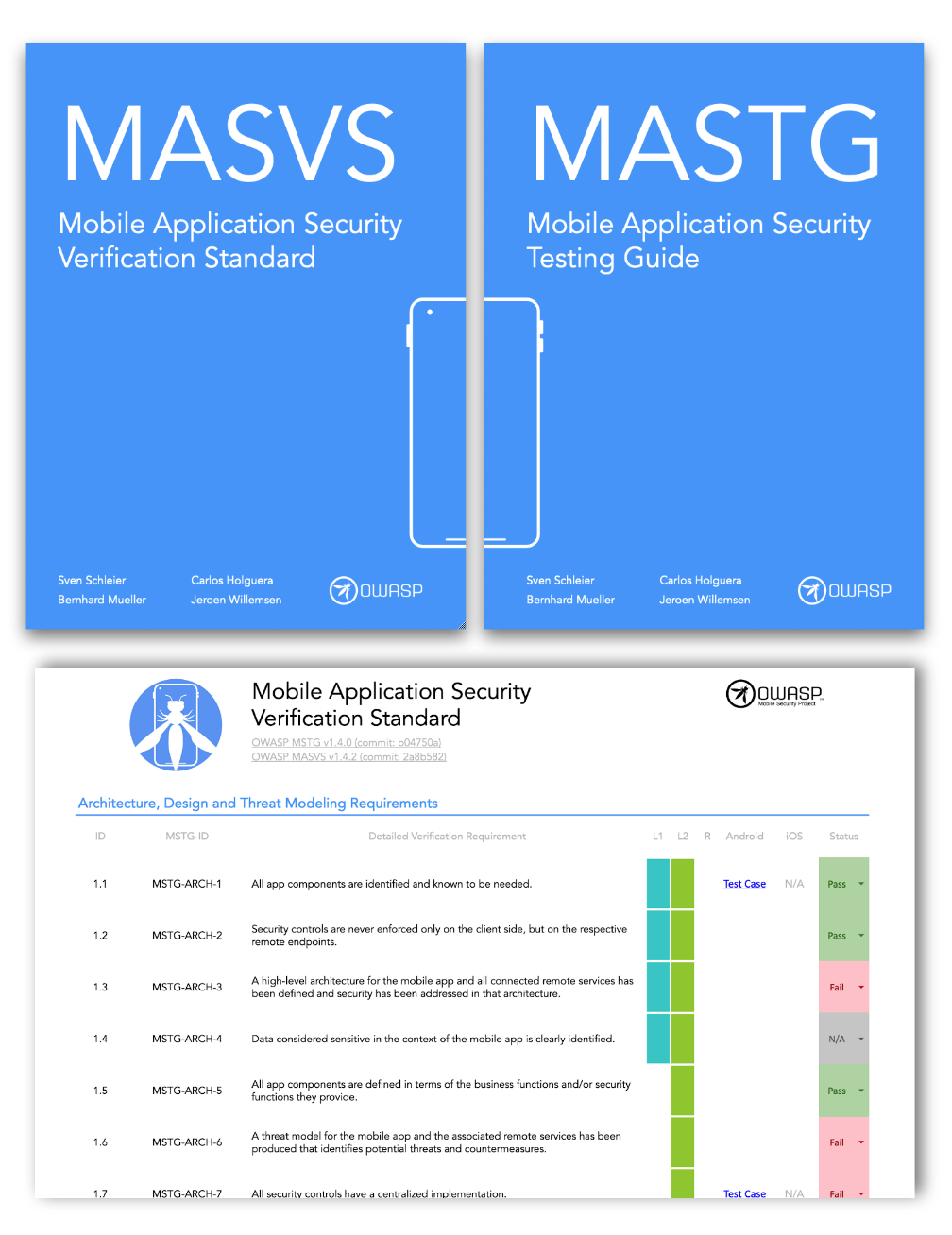 For example, the MASVS requirements can be used in an app's planning and architecture design stages while the checklist and testing guide may serve as a baseline for manual security testing or as a template for automated security tests during or after development. In the "Mobile App Security Testing" chapter we'll describe how you can apply the checklist and MASTG to a mobile app penetration test.

Many mobile app penetration testers have a background in network and web app penetration testing, a quality that is valuable for mobile app testing. Almost every mobile app talks to a backend service, and those services are prone to the same types of attacks we are familiar with in web apps on desktop machines. Mobile apps differ in that there is a smaller attack surface and therefore more security against injection and similar attacks. Instead, we must prioritize data protection on the device and the network to increase mobile security.

The protection of sensitive data, such as user credentials and private information, is crucial to mobile security. If an app uses operating system APIs such as local storage or inter-process communication (IPC) improperly, the app might expose sensitive data to other apps running on the same device. It may also unintentionally leak data to cloud storage, backups, or the keyboard cache. Additionally, mobile devices can be lost or stolen more easily compared to other types of devices, so it's more likely an individual can gain physical access to the device, making it easier to retrieve the data.

When developing mobile apps, we must take extra care when storing user data. For example, we can use appropriate key storage APIs and take advantage of hardware-backed security features when available.

Fragmentation is a problem we deal with especially on Android devices. Not every Android device offers hardware-backed secure storage, and many devices are running outdated versions of Android. For an app to be supported on these out-of-date devices, it would have to be created using an older version of Android's API which may lack important security features. For maximum security, the best choice is to create apps with the current API version even though that excludes some users.

Cryptography is an essential ingredient when it comes to protecting data stored on a mobile device. It is also an area where things can go horribly wrong, especially when standard conventions are not followed. It is essential to ensure that the application uses cryptography according to industry best practices, including the use of proven cryptographic libraries, a proper choice and configuration of cryptographic primitives as well as a suitable random number generator wherever randomness is required.

In most cases, sending users to log in to a remote service is an integral part of the overall mobile app architecture. Even though most of the authentication and authorization logic happens at the endpoint, there are also some implementation challenges on the mobile app side. Unlike web apps, mobile apps often store long-time session tokens that are unlocked with user-to-device authentication features such as fingerprint scanning. While this allows for a quicker login and better user experience (nobody likes to enter complex passwords), it also introduces additional complexity and room for error.

Mobile devices regularly connect to a variety of networks, including public Wi-Fi networks shared with other (potentially malicious) clients. This creates opportunities for a wide variety of network-based attacks ranging from simple to complicated and old to new. It's crucial to maintain the confidentiality and integrity of information exchanged between the mobile app and remote service endpoints. As a basic requirement, mobile apps must set up a secure, encrypted channel for network communication using the TLS protocol with appropriate settings.

Interaction with the Mobile Platform (MASVS-PLATFORM)¶

Mobile operating system architectures differ from classical desktop architectures in important ways. For example, all mobile operating systems implement app permission systems that regulate access to specific APIs. They also offer more (Android) or less rich (iOS) inter-process communication (IPC) facilities that enable apps to exchange signals and data. These platform-specific features come with their own set of pitfalls. For example, if IPC APIs are misused, sensitive data or functionality might be unintentionally exposed to other apps running on the device.

Traditional injection and memory management issues aren't often seen in mobile apps due to the smaller attack surface. Mobile apps mostly interact with the trusted backend service and the UI, so even if many buffer overflow vulnerabilities exist in the app, those vulnerabilities usually don't open up any useful attack vectors. The same applies to browser exploits such as cross-site scripting (XSS allows attackers to inject scripts into web pages) that are very prevalent in web apps. However, there are always exceptions. XSS is theoretically possible on mobile in some cases, but it's very rare to see XSS issues that an individual can exploit.

This protection from injection and memory management issues doesn't mean that app developers can get away with writing sloppy code. Following security best practices results in hardened (secure) release builds that are resilient against tampering. Free security features offered by compilers and mobile SDKs help increase security and mitigate attacks.

There are three things you should never bring up in polite conversations: religion, politics, and code obfuscation. Many security experts dismiss client-side protections outright. However, software protection controls are widely used in the mobile app world, so security testers need ways to deal with these protections. We believe there's a benefit to client-side protections if they are employed with a clear purpose and realistic expectations in mind and aren't used to replace security controls.